Ok, it’s Mr. Labored-Metaphor here with another edition of “Let’s Confuse the Reader”.

Sometimes I get a little tired of people and companies subtly bragging about how rebellious and unique they are.  Blazing their own trail.  Such a maverick.  Rebel.  Such a black sheep.  So out of step. 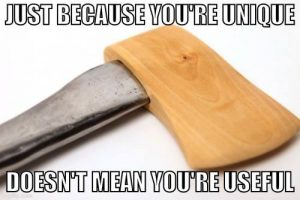 The truth of the matter is…Most people who truly are blazing their own trail don’t know any different.  To them, they are just doing what’s natural and if it’s successful: great.  It’s true in art, music, food, business…you name it.  Apple spent a LOT of money telling people how unique they used to be.  While every company is unique in *some* way, the rules and tradition of running a business could hardly be construed as conducive to non-conformity.  Hell, even Enron made big claims about how different they were and we all know how that turned out.  To be fair, Steve Jobs was a truly unique individual, as was Woz (Aaaaaand that’s enough alliteration for one day).  Anyway, back to my point (which is what, exactly?)…Trying to be different is not even in the same ballpark as being lucky enough to actually BE DIFFERENT.  Teenagers have struggled with this since the beginning of puberty.  You are either able to embrace the unique experiences and wisdom you find yourself with or you aren’t.

In the immortal words of Alan Watts: Become what you are.

There are many, many “me-too” companies out there, and frankly it’s one of the things that keeps capitalism functioning.  Being challenged with competition (even if it’s “unfair”) only makes companies smarter and products better.